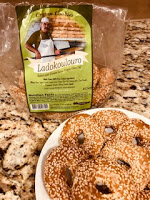 As Doug and I continue to explore Charlotte, NC and the surrounding around, we tend to seek-out Greek and Middle Eastern stores and
establishments (meaning restaurants).

We stumbled upon a rather small Greek store called the
Agora Greek Market on the east side of Charlotte which offers lots of goodies –
spices, sweets, oils, cheeses, even family-sized packages of frozen pastitsio,
moussaka, and baklava!

We purchased a few items including a bag of Greek sesame seed-olive
oil cookies called Ladokoulouro, a product of Crete. Once home, it was
imperative that we sample the cookies right away. I put on a pot of coffee and
opened the bag of cookies. We found them to be not too sweet – which we liked, with
a gentle hint of cinnamon and cloves, and a pleasing crunch – just right for dunking
into our coffee.

Since the Agora is a bit far from home and we won’t be going that
way too often, I thought it wise to find a recipe for Ladokoulouro to make at
home. I searched several recipes online and pieced one together that made sense
to me.

Zest an orange before juicing; set aside until ready to
use.
In a large bowl, whisk together 4 cups of the flour, baking
soda, baking powder, salt, cinnamon and cloves until blended.
In another bowl, whisk together the olive oil, orange
juice, water, orange zest, sugar,   vanilla and cognac (if using) until well-
incorporated.

Add the flour mixture a little at a time stirring with a wire
whisk to combine. At this time you may add additional flour, but not more than
5 cups total.

If the mixture becomes too thick to mix with the whisk, use
your hands to combine.
Fold-in the sesame seeds using a rubber spatula and mix
until combined. (NOTE: Alternately, before baking, you could dip the
shaped cookies into the sesame seeds, pressing so seeds adhere, but this will be more time-consuming.)

The dough may appear to be quite sticky to this point;
don’t panic! Set it aside for 10 minutes or so. You’ll find that the dough will
become quite workable.
Pinch-off walnut-sized balls of dough. Roll the balls into 4-inch
logs and placing them on a parchment-lined baking pan. You can also create a
doughnut-shaped cookie by taking the walnut-sized ball, placing it on the
parchment-lined baking sheet, flattening it, and making a hole in the
center with your finger. Personally, I liked the doughnut-shaped cookies better than the logs. They came out crispier – just the way I like it!
Be sure to leave some room in between each cookie on the baking pan to allow
for expansion.

Bake in the preheated oven for about 25 minutes or until
the cookies become slightly browned around the edges and top.

NOTE: If baking more than one tray
of cookies at a time, rotate the trays halfway through the baking time by
switching the bottom tray to the upper rack and the top tray on the bottom.
This will ensure even baking.

Place the cookies on wire racks to cool completely.