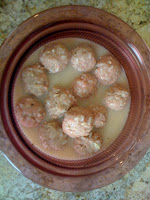 In the Southern U.S., a recipe called “Porcupine Meatballs” combines ground beef with chopped onion, rice, seasonings. The mixture is formed into balls, then cooked in a tomato-based sauce.


Why the name porcupine? The cooked rice sticks out of the meatballs, somewhat resembling the quills that protrude from a porcupine.


Aside from the above tidbit, the recipe sounds suspiciously similar to an Armenian recipe my mother-in-law gave me. She called it Bolsetsi Kufteh — in other words, kufteh (Armenian meatballs) as made in Bolis, the Armenian name for Istanbul.


Neither of us can vouch for the origin of the recipe. Doug’s Mom wasn’t Bolsetsi, nor was anyone else in either of our families.


But we can assure you that this is one hearty, satisfying dish that combines the tang of Armenian lemon-chicken soup with the tummy-filling goodness of meat and rice.


Do any of you recognize this dish by another name? If so, please let us know!


Directions:
1. Mix together the meat, egg, onion, rice, salt, pepper & dash of water.
2. Shape into about 12 – 15 meatballs. Coat in flour.
3. Bring 2 quarts of water to a boil; add bouillon cubes.
4. Carefully add meatballs to water. Reduce heat to medium and cook for about 25-30 minutes, or until rice is tender.


Here’s the part of our recipe that makes it different from the southern version. The southern recipe generally use a tomato-based sauce; the Armenian sauce uses egg yolks and lemon juice, no tomatoes.


Sauce Ingredients:
2 egg yolks
Juice of one lemon, or to taste


Sauce Directions:
Prepare sauce just before serving.
1. In a small bowl, mix together the egg yolks and lemon juice.
2. Add a few tablespoons of the hot cooking broth to the egg-lemon mixture, stirring constantly.
This procedure, called tempering, helps prevent the eggs from scrambling.
3. Slowly stir the tempered egg mixture into the broth – the color of the broth will change instantly.
4. Cook on low heat for about 5 minutes.


Serve immediately in soup bowls with lots of crusty bread for dipping.