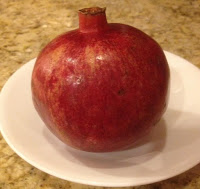 When and how did this begin?

A few years ago, St. David Armenian Church in Boca Raton,
FL (our former parish) had it’s very first Blessing of Pomegranates. Here is an excerpt
from the church newsletter from late 2015 explaining this then-new tradition:

“In 2015, His Holiness Karekin II, Catholicos of All
Armenians, blessed pomegranates in the Mother See of Holy Etchmiadzin for the
first time and established it as an annual tradition on New Year’s Eve (or
day).

The Pomegranate is considered by many faith traditions to
be the fruit of the tree of knowledge and a symbol of abundance and life.

The custom of blessing fruits was known among the Israelites.  The Jews offered to the Temple the first
harvest, which included wheat, barley, grapes, figs, pomegranates, olives and
honey.

In nations of the East, the pomegranate is considered to be
the king of all fruits, not only because of its pleasing taste and medicinal
properties, but also because the top of the pomegranate resembles a crown.  Some believe that the design of ancient royal
crowns was based on the pomegranate “crown”.

The pomegranate has been known in the East from the 12th to
the 7th centuries BC.  Because Cartagena
was known for its pomegranates, the ancient Romans called the pomegranate malum
punicum ‘Cartagena (Phoenician) apple’ and malum granatum ‘granular apple’.

As a national symbol, the pomegranate has been widely used
in Armenian architecture, carpet weaving, arts and crafts and manuscripts
illuminated by Gregory Khlatetsi, Toros Taronatsi, Toros Roslin, and in the
Haghpat and other Gospels.

The pomegranate’s crown represents Jesus’ crown and His
sovereignty over the entire world.  The
red color symbolizes His salvific Blood that was shed for all.  The popular belief is that each one contains
365 seeds corresponding to the number of days in a year, symbolizing new life
in Christ and the New Year.”

Here’s a recipe for ‘Quinoa with Pomegranate and
Pistachios’ from actor Stanley Tucci, which I posted a number of years ago:

Note: For more pomegranate recipes,
scroll through the recipes lists on the right side of the screen – or – go to
the search bar at the top of the page and type ‘pomegranate’.

Quinoa with Pomegranate and
Pistachios

1. Rinse quinoa in cold water to remove its bitterness.
2. Bring 4 cups salted water to a boil. Add quinoa, reduce
heat to low, cover, and simmer for 15 to 20 minutes.
3. Prepare a dressing with the 2 Tbsp. EVOO, lemon juice,
salt and pepper. Place quinoa in a serving bowl. Toss with the dressing; set
aside to cool.
4. Gently mix in the pomegranate seeds, pistachios and
scallions. Taste and adjust seasonings, if necessary.

Serve with sliced oranges drizzled with olive oil, if
desired. 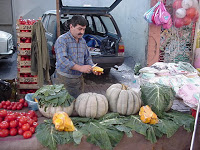 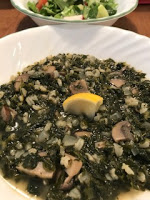 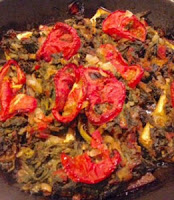