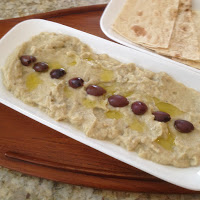 What a relief! After years of avoiding eggplant, my husband
was informed by his doctor that he is not allergic to this particular
nightshade.

Doug and I have been married for almost 38 years, and in
that time I have avoided preparing any dish which required eggplant or
walnuts on his behalf. These two very Armenian ingredients caused undesirable reactions when he ate either of them.


Before we went to Armenia last April,
Doug was determined to try eating eggplant. He’d discussed his eggplant
concern with his doctor and after a thorough examination, Doug got an ‘all-clear’
report. The doctor confidently stated, “Eat some eggplant; it won’t kill you. I’ll
stake my reputation on it!”

I asked Doug why, after all these years, was he so anxious
to check on this alleged food allergy. He said he was afraid that eggplant
might be ‘hidden’ in some recipe in Armenia, and if he ate it and suffered an
allergic reaction, he couldn’t be sure of receiving proper medical attention so far from
home.

I couldn’t argue with that. So, off to the market we went
to begin our eggplant experiment.

We bought a variety of eggplants – different shapes, colors, and sizes.
We grilled slices coated with a little olive oil, salt and pepper; dipped some
slices in egg and pan-fried them; and made mutabbal (eggplant -tahini purée, or to some, baba ganoush). See recipe
below.


Doug valiantly sampled bite-after-bite,
recipe-after-recipe. The result: no reaction to eggplant at all! Would he
continue to eat eggplant? Possibly, but he won’t go out of his way to ask for
it or order it in a restaurant. The important thing is he won’t have to worry
that eggplant might be lurking in a recipe, or fear for his life.

Now, if he could get a medical ‘all-clear’ for walnuts –
but – that’s another story.

Directions:
1. Wash the eggplant and pat dry. Using a sharp knife or fork, pierce the skin in several   places on all sides of the eggplant.

2. Preheat oven to 450-500°F. Line a baking sheet with heavy-duty aluminum foil. Bake for 20 to 30 minutes, turning the eggplant halfway through. The eggplant skin should turn black and the flesh should be soft but not mushy.

3. Allow eggplant to cool. Remove the stem and skin, scraping off any flesh that might adhere to skin. Discard as many seeds as possible.


4.    Place eggplant flesh in bowl and mash thoroughly with a fork.  Add the mashed garlic, salt, lemon juice, tahini, cumin (if using), and water, mixing until well-blended. (An immersion blender, food processor or regular blender may be used for this step.)

5.    Spread eggplant mixture on a serving plate; smooth it out with the back of a spoon. Garnish with a drizzle of olive oil, chopped parsley or chopped olives, if desired. Serve as an appetizer with pita bread or lavash.

My Observation: I used only half the amount of the tahini-garlic mixture. It would have been enough for 2 roasted eggplants. By the time the eggplant was cooked and the seeds were removed, the amount of flesh was less than I anticipated. I have enough leftover tahini mixture for another roasted eggplant – or – to use in a hummus recipe!
(Visited 111 times, 1 visits today)
Armenian appetizers baba ganoush eggplant-tahini puree mutabbal 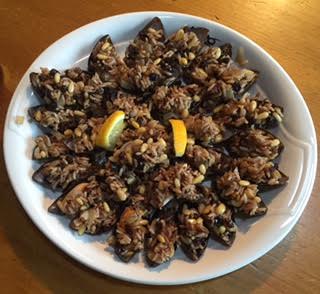 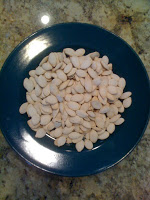 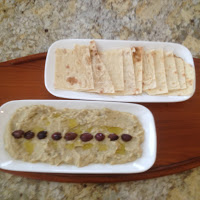