Like many Armenian food terms, Kavourma can mean something different depending on the region or even village your family comes from.

It’s always some form of cooked lamb, but to us the definitive kavourma is the rich, fat-enveloped favorite from the city where both our fathers’ families originated: Dikranagerd.

So when Doug mentioned kavourma in a post the other day, I got an idea to call America’s best-known Dikranagertsi: Onnik Dinkjian.

You probably know Onnik as one of the most beloved Armenian singers in the world. We know him as…well, Onnik. No matter the setting, he is every bit as charming as his on-stage persona. He is a warm and generous host, an engaging raconteur and an enthusiastic proponent of all things Dikranagertsi!

So his response really should not have surprised me when I asked when he last ate kavourma. “I just had some for lunch today,” he said.

How could that be? I was sure nobody still made kavourma in this age of heightened cholesterol consciousness.

But Onnik does. His wonderful and patient wife, Araksi, won’t eat it — but she’s given up trying to stop him.

The mere mention of kavourma launched Onnik into reminiscences about his parents’ table. He remembers his father soaking up the excess fat with bread, and then wolfing down the bread with gusto.

Trust us: That is SO Dikranagertsi!

Armenians have been preserving meat in fat for centuries. Now it’s our turn to preserve Onnik’s recipe for generations to come.


Onnik’s Kavourma
1 leg of American lamb
1 apple, any kind, cut into quarters (quince can also be used when in season)
water
flank fat (order from the butcher ahead of time) If flank fat is unavailable, use unsalted butter.
salt, to taste

1. Trim the leg of lamb to remove skin and so on.
2. Cut meat into approximately 2 inch squares.
3. Place cubes of meat into a large pot and cover meat with water. Bring to a boil. Cook for about 15 minutes.
4. Remove meat and rinse with cold water.
5. Clean the pot, return meat to the pot, add fresh water, salt, and the apple pieces. Cook until meat is fork tender, about 1 ½ hours.
(Onnik says the water should have evaporated quite a bit, without burning the meat on the bottom. The purpose of the apple is to cut the heaviness of the fat.)
6. Add flank fat, if you were able to get it, otherwise add 1 lb of  butter.  Continue to cook for a while – keep your eye on it!
7. Place cooked meat in a non-metalic bowl – (for ex: Corningware). Press meat as you place in the bowl, so fat rises to the top. The fat must cover the meat. This keeps air out, acting as a preservative.
8. Cover tightly and refrigerate. The longer it sets in the refrigerator, the better it is! NOTE: The kavourma can be frozen, too. 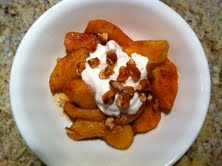 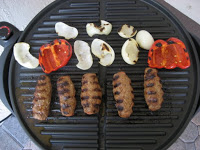 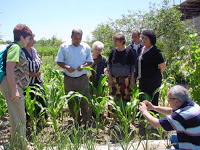