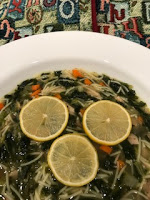 It’s soup season again! It’s time to dig out a large pot and whip-up a soup
that will warm your body and soul.
Don’t know what to make? You’re in luck!
Christine Datian has a lot of recipes from which to choose, but today’s
offering is her Lemon – Chicken – Spinach Soup with Mint.

It sounded so good, I decided to make this for dinner, but discovered I didn’t have the exact ingredients she mentioned.
What did I do? I’ll share my version at the end of the post.

In a large soup pot, bring the chicken or turkey broth to a
full boil; add carrots, celery, onion, garlic, fresh mint, spices, the juice of
one lemon and the zest, and stir a few times until the soup boils again.  Reduce heat to medium, cover, and cook for
25-35 minutes, stirring occasionally, until vegetables are tender.

Add the egg noodles, spinach, parsley, and shredded chicken
about 10-12 minutes before serving; stir now and then to prevent the noodles
from sticking. Test the noodles to make sure they’re done – and – serve.

Garnish soup with chopped fresh mint, thin slices of lemon,
or a drizzle with olive oil, if desired.


For the preparation, I first sauteed the onion, carrots, celery and garlic in a little olive oil, over medium heat, until the vegetables were tender. Then, added the broth, seasonings, lemon juice, zest, and frozen chopped spinach. I brought the broth to a boil, added the noodles and cooked, stirring now and then,  for about about 7- 9 minutes until the noodles softened.
At that point I added the parsley and shredded, cooked turkey and cooked until the turkey was heated through.


My soup was garnished with thin, round lemon slices as seen in the photo above.
I’m happy to report, Doug gave it two thumb’s-up, so Thank You, Christine! 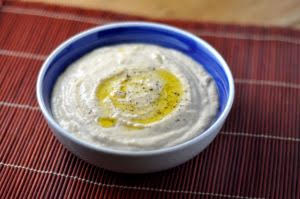 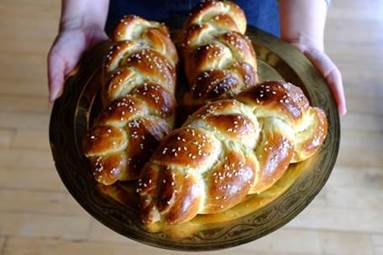