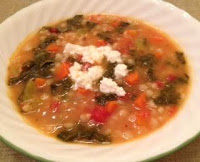 Winter came and went in one day in South Florida. It happened on Friday, December 30, 2016, when the temperature barely climbed
into the mid – 60’s during the day and dipped into the low 50’s at night.
I hear what you’re saying …”She calls THAT winter?!?” Well, that’s how  our winters are. Believe me, I’ve shoveled
enough snow during my years in New Jersey, so I delight in the south’s version
of this season!

This ‘cold spell’ prompted me to bring out the big pot and
make some stick-to-your-ribs soup. I prepared Kale and Pearl Barley Soup to satisfy our tummies and our souls.

Stir in broth, diced tomatoes with its juice, pearled barley,
oregano, salt and pepper; bring to a boil.

Reduce heat to medium-low and cover;
simmer, stirring often, for 35-40 minutes, or until barley begins to soften. (NOTE: Farro and
regular barley might take less time to cook.)

Stir in kale and white beans;
cook  another 10–15 minutes or until barley and kale are tender.
You will have to add
more broth as the soup cooks, as the barley will absorb quite a bit of liquid – otherwise this will become Kale and Pearled Barley Stew, which is not a bad thing!

Stir in lemon zest and juice. 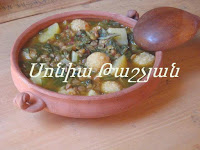 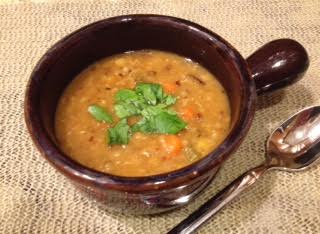 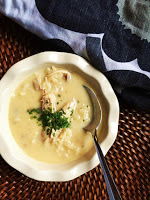