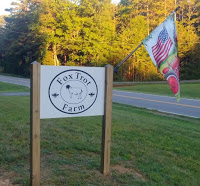 While doing an online exploration of Lancaster County, South
Carolina last month, Doug came across a place called Fox Trot Farm not far from
our home. What drew him to this farm was the fact that they raise lamb for
their meat. According to the website, the owners raise ‘a breed of meat sheep
known as “hair sheep” due to their ability to shed their coats in the spring
and summer. Their meat is lean, mild, and tender.’

In addition to sheep, Fox Trot Farm has goats (their milk
is used to make soap which is sold on the farm), a donkey, a pig, livestock
guardian dogs, and chickens for their farm-fresh eggs.

There’s an apiary for
their honeybees, too. The honey is harvested in June and the extra beeswax is
melted for use in soaps. Honey is for sale as it becomes available.

Farmer Bob Burgess and his wife Debbie, a warm and welcoming couple,
own and operate the farm. It’s open only on Sundays between 1-5 PM,
weather permitting.

Bob takes visitors on a tour in the hay wagon pulled by his
tractor, while Debbie runs the store, among many other things.

Doug and I chose to walk the grounds in order to hang out with the
farm animals; it was pretty neat!

We’d hoped to be bringing home a variety of lamb cuts that
day but discovered their lamb production isn’t until September. You can bet-your-boots we’ll
be heading back then.

I was particularly happy to learn that the Burgess’ favorite
recipes are posted on their website, including the following one for Lamb
Shanks.

As soon as lamb products are available, we’ll return to Fox Trot Farm, to purchase the
shanks and other cuts. We’ll have a lamb-fest – and report back to you!

Directions:
-Defrost, rinse and dry lamb shanks.
-Liberally dust with flour, salt, and pepper.
-Heat oil in Dutch oven till shimmering. Do not burn.
-Brown shanks on all sides in hot oil, turning as the meat
becomes deep brown. (Important for richer flavor to not skip this step.)
-Remove browned shanks to plate.
-Add chopped vegetables to the pan drippings and sauté till
they start to soften.
-Add garlic, thyme, and tomato paste and stir till combined
with vegetables.
-Pour 1 cup wine (or chicken broth), and remaining broth
into the vegetable mixture. Bring to a boil, then reduce to a simmer.
-Add bay leaf and season to taste with salt and pepper. (I
go light on the pepper and let folks add more to their plate when served.)
-Return shanks to the Dutch oven and nestle them down into
the vegetables and broth.
-Tightly cover and turn heat down to low simmer. Braise, turning
every 20 minutes or so, for 2 hours or until the meat is falling-off-the-bone
tender.
-Serve over rice, potatoes, noodles, or just in a bowl with
the broth and sop up all that delicious broth with crusty bread or rolls.
-One shank is a perfect portion for each person.
(Visited 132 times, 1 visits today)
Fox Trot Farm-Lancaster SC; Fox Trot Farm Braised Lamb Shanks 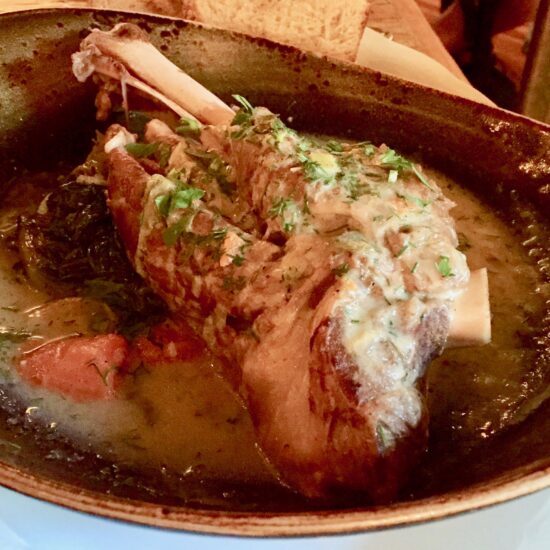