In 2011, Doug and I were introduced to Chef John Minas by way of Taniel Koushakjian, founder and editor-in-chief of the Florida Armenians group. At the time, Chef Minas was newly selected as the Executive Chef for Governor Rick Scott and his First Lady at the Governor’s Mansion, Tallahassee, FL.

Quite an achievement for such a young chef!

When the article was written, Chef Minas was just getting started. He’d planned to stay in Tallahassee for a long time, which he did. When asked what his future plans were, he stated, “… who knows?”

Since his departure from the Governor’s Mansion, Chef Minas became the Executive Chef/ Managing Partner at the Edison Restaurant (Tallahassee), and is now the Founder/Executive Chef at Minas Hospitality.

Who could ask for more?

The following recipe and photo are from Chef Minas’ Blog, and are printed here with his permission. 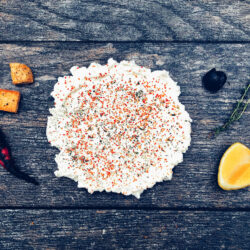