Armenian food was everyday food when I was growing up, but it could also be something mysterious and special if it involved a trip to a restaurant.


There were no Armenian restaurants in New Jersey, at least that I remember, but there were plenty in the far-off and forbidding land known as New York City.


Technically, Midtown Manhattan was only two or three miles from our front door, but the Hudson River might as well have been the Atlantic Ocean as far as my parents were concerned.


To my mother, who lived and worked in New Jersey all her adult life, New York was a crazy place full of crazy people who were best avoided. To my father, a world traveler who had lived and toiled in far crazier places, New York was simply a pain. The roar and bustle that inspired others to write symphonies just gave him a headache.


I first heard about the Armenian restaurants of New York from Uncle Arpag, my father’s best friend and adopted brother. He’d sometimes make the rounds on Saturday night, then recount the evening over coffee at our house on Sunday morning.


It all sounded exotic, especially the talk of nightclubs with bellydancers. (I thought they only existed on the cover of certain record albums that were kept out of reach.)


I knew the food was real because he always brought me some. I was probably 8 or 9 when Uncle Arpag surprised my father with a tinfoil tray of midia dolma, black mussels stuffed with rice and currants. I’d never seen or tasted anything like it.


To everyone’s surprise, I fell in love at first bite. From then on, Uncle Arpag made a point of bringing them for me.


My father’s aversion to New York travel eased just enough by the time I was in my teens to allow for a rare family trip to a museum or special event. The occasion was always marked by a visit to an Armenian restaurant.


I particularly remember the Dardanelles, a small and very New York down-the-steps place near The Village. The Ararat, somewhat larger and farther uptown. But most especially, I remember The Golden Horn, a lavish and impressive place in Midtown that seemed by far the most upscale of Armenian eateries.


Everything at these restaurants tasted special because it was different from the Armenian food my mother made. The seasonings, the textures, even the names on the menu were all just a little off kilter but not in a bad way. And like midia dolma, some things were not familiar at all.


My favorite discovery was the Golden Horn’s ekmek kadayif, a dessert that featured the sweetest honey drizzled over an impossibly rich layer of cream nearly as thick as butter. The technique was said to involve standing on a ladder and dripping cream slowly into a pan.


“My madzoon is just as thick, and I don’t have to stand on a ladder,” my mother insisted. She was right on both counts, but I could have her home-made yogurt any day. From my first taste, I made sure ekmek kadayif was added to Uncle Arpag’s take-out menu.


By the time I met and married Robyn, I was working in Manhattan but the Armenian restaurants were all off my usual path. We drove into The City just once to have dinner at The Dardanelles. (I’d practiced ordering in Armenian but the waiter just looked at me, puzzled. I figured my Armenian was even worse than I imagined until I noticed his name tag read “Julio.”)


Soon after that, we moved to Florida. On a trip back North in the mid 1980s, I was determined to take Robyn and our daughter Mandy to some of the restaurants I remembered. But they were all gone, and not much has come to take their place.


It puzzles me. I understand changing demographics and shifting tastes, but how can a city that boasts of being so cosmopolitan be so lacking in Armenian cuisine?


For me, a trip to Manhattan will never be quite as special without dinner at an Armenian restaurant. My wife makes wonderful midia dolma, but she draws the line at standing on a ladder.


So I’ll have to go on missing ekmek kadayif, which is a shame for my taste buds but probably a plus for my arteries. 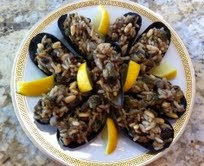 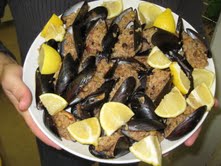