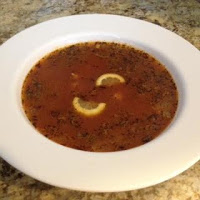 Lucine Kasbarian was scrolling through the recipe lists on
The Armenian Kitchen website to see if there was a recipe for Harsness Abour
(Bride’s Soup). When she didn’t find one, she was kind enough to offer me her
family’s recipe.

The recipe (seen above) is from her maternal grandmother, Armaveni
Ghazarian-Hamparian. The measurements provided in her recipe were in the
traditional format, atchkee-chop, meaning ingredients were measured by eye (or
by memory), since formally written recipes were unheard of.

Before I get into the recipe, I’d like to share Lucine’s
grandmother’s story with you. Like so many stories from the Armenian genocide, hers
is a story of survival.


As told to me by Lucine Kasbarian:

“My maternal grandmother, Armaveni Ghazarian (married name
Hamparian), was originally from the city of Sepastia in the province of
Sepastia. Like so many of our ancestors, she and her family members were driven
from their Armenian homeland within the Ottoman Empire into the Syrian Desert
of Der Zor during the 1915 Genocide.
Without making light of the ordeals that she and her compatriots went
through by cutting things short, I will just say that  Armaveni, at age 15, witnessed
her cousin driven insane by what he observed on the death marches, and that
Armaveni watched her own mother starve to death, burying her mother’s body in
the desert with her own hands.

Armaveni was taken
into a Protestant orphanage where she was taught the domestic arts. Eventually,
relatives would raise boat fare for her to come to America. A parish priest at
St. Illuminator’s Armenian Cathedral in New York introduced her to a compatriot
from Sepastia, Hampartsoom Hampartsoomian (later shortened to Hamparian). He
had been made a widower as a result of the Genocide. Armaveni and Hampartsoom
soon married and produced three children: Nishan, Ardashes and Aghavni…my
mother.

Armaveni would
contribute to the family’s welfare by working as a washerwoman, seamstress,
cook and caregiver to children. One of her many recipes, carried in her memory
from Sepastia, was Harsness Abour or Bride’s Soup.  I learned to make this soup from Armaveni’s
daughter, my mother, Aghavni Hamparian-Kasbarian. My guess is that, back in the
Old Country, it was the type of dish a bride would make for her groom – or – something
a mother-in-law would make in honor of the bride.”

Harsness Soup, a recipe from Armaveni Ghazarian – Hamparian
Serves 4 to 5

Ingredients:
1-15 oz. can beef broth
2 broth-cans of water – (too much? Let final soup simmer
uncovered to evaporate some liquid) –OR- about 3 to 3-1/2 cups water
1 teaspoon salt
1 “Armenian coffee cup”-size serving of uncooked
white rice (NOTE: My Armenian coffee cup measured 1/2 cup rice)
1 large fist-size amount of ground lamb, cooked in its own
fat so it breaks up into small clusters and is no longer pink; drain excess fat
(NOTE: I used ½ lb. ground turkey that I had on hand, but ground lamb is the way to go!)
1/2 of a 15 oz. can of tomato sauce -not tomato paste (NOTE:
I used 1-8 oz. can tomato sauce.)
½ medium onion, coarsely chopped
1 Tbsp. dried mint, crushed
I tsp. Crisco brand oil (NOTE: I used one Tbsp. olive
oil.)
Salt and pepper to taste (NOTE: Since I used ground turkey, I also added beef bouillon to enhance the flavor.)

Serving: a touch of lemon juice

In a 6-quart pot, boil together the beef broth, water and
salt.

Add the rice, cooked ground lamb, and tomato sauce. Reduce
heat, cover, and cook about 20 minutes, or until the rice is softened.

While this is cooking, prepare the SOKHURATZ
(sautéed onions):
Heat the oil in a skillet over medium-low heat. Add the
chopped onions and sauté, stirring constantly, until they begin to turn golden,
but not burned. Stir in crushed mint.

When the onion mixture is done, add it to the soup and stir
until blended.

Before serving, season with salt and pepper to taste. 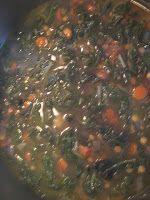 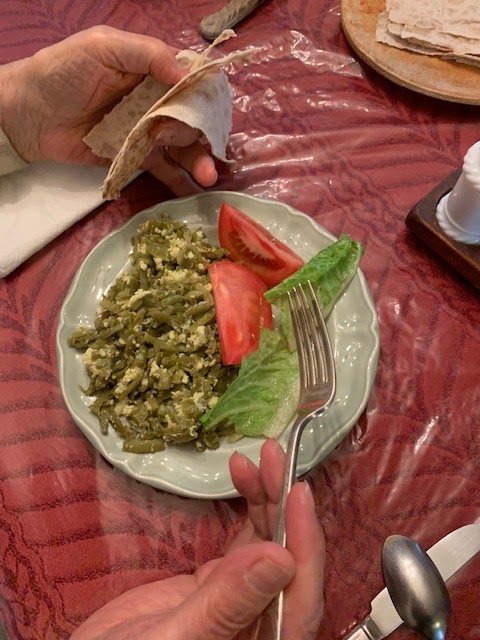 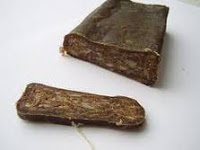