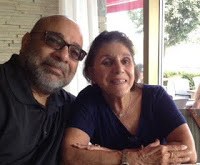 After being in the Catskill Mountains of New York for the
past 3 months, we’re finally back in Florida. What a journey it was! Our
daughter and son-in-law’s wedding was the highlight, of course, but we managed
to squeeze in some visits to family. First, we spent a few days with my sister Dawn and brother-in-law Ara, whose gracious hospitality was much appreciated. Then we
popped in on two of Doug’s family members we hadn’t seen in years.

One such visit was to Doug’s cousin Charlotte Ermoian, who
manages—and lives in—one of those tall condo buildings in Fort Lee, NJ where
Palisades Amusement Park once stood. She’s really awesome—keeps fit, works
hard, and lives life to the fullest. Charlotte treated us to lunch at a trendy place
on the Hudson River, overlooking NYC while we caught up on family news.

As we were parting, Charlotte said she was going to call
her aunt Alice Bakalian to tell her about our visit, which meant Alice would be
expecting us to visit her too.

After we said our good-byes to Charlotte, Doug and I drove
through his old stomping grounds, Ridgefield, his hometown and Cliffside Park.
While driving down Cliffside Park’s Anderson Avenue, we spotted an
Armenian/Middle Eastern grocery store, ‘Arenie.’ We stopped in to check it out.

The store was chock-full of delicious-looking items. Before we knew it, our arms were loaded down with lots of goodies—lahmajoun, manti, string cheese, etc., and a magazine called ‘Dining Out’
which features restaurants in New Jersey’s Hudson and Bergen counties. We
snatched-up two copies, mainly for these reasons: #1- Doug’s cousin, Paul
Turpanjian is the publisher, and #2- Doug had an article featured in that particular issue, ‘Food Culture:Armenia – An introduction to Armenia, plate by plate.’
If
we hadn’t stopped at Arenie, we would never have seen his printed article – oh, and
the food we bought there was really good, too! Dawn and Ara agreed.

The day we departed my sister’s in North Jersey, we
detoured to South Jersey to have lunch with Alice and her husband Azie, who
live outside of Atlantic City. Both are in their 90’s, but you’d never know it. They’re in great shape – physically
and mentally, and could, literally, run circles around the two of us.

While having lunch at their clubhouse sports restaurant,
Azie gave us a clue to his longevity – he ordered a BBQ pork sandwich, with
French fries and beer. No kidding!

They insisted we return to their house for coffee and
dessert before heading south, but we were eager to get back on the road to
Florida. We compromised, however. Before leaving, Alice insisted on giving us
dessert–to-go (her homemade brownies), plus bottled water, a roll of paper
towels, and a roll of aluminum foil.


She tucked it all into a fancy gift bag she’d brought home
from one of the local casinos. It was decorated with the words “Thank You” in
numerous languages including—you guessed it—Armenian.

I thought the addition of the foil was a bit odd until
Alice told us the story behind it: She’d bought her usual brand (Handi-Foil) at a local grocers and didn’t think anything of it until her granddaughter pointed
out these words on the label: “Packaged in U.S.A. from foil made in
Armenia.”

What were the odds of coming across that? You’d probably
have a better chance of winning big at the casino, but that wouldn’t be nearly
as much fun! 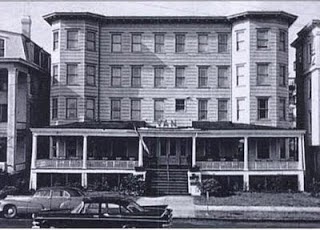 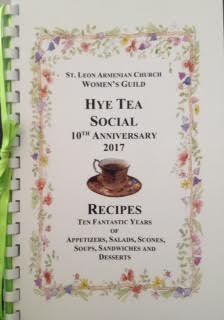 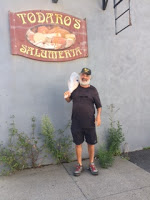