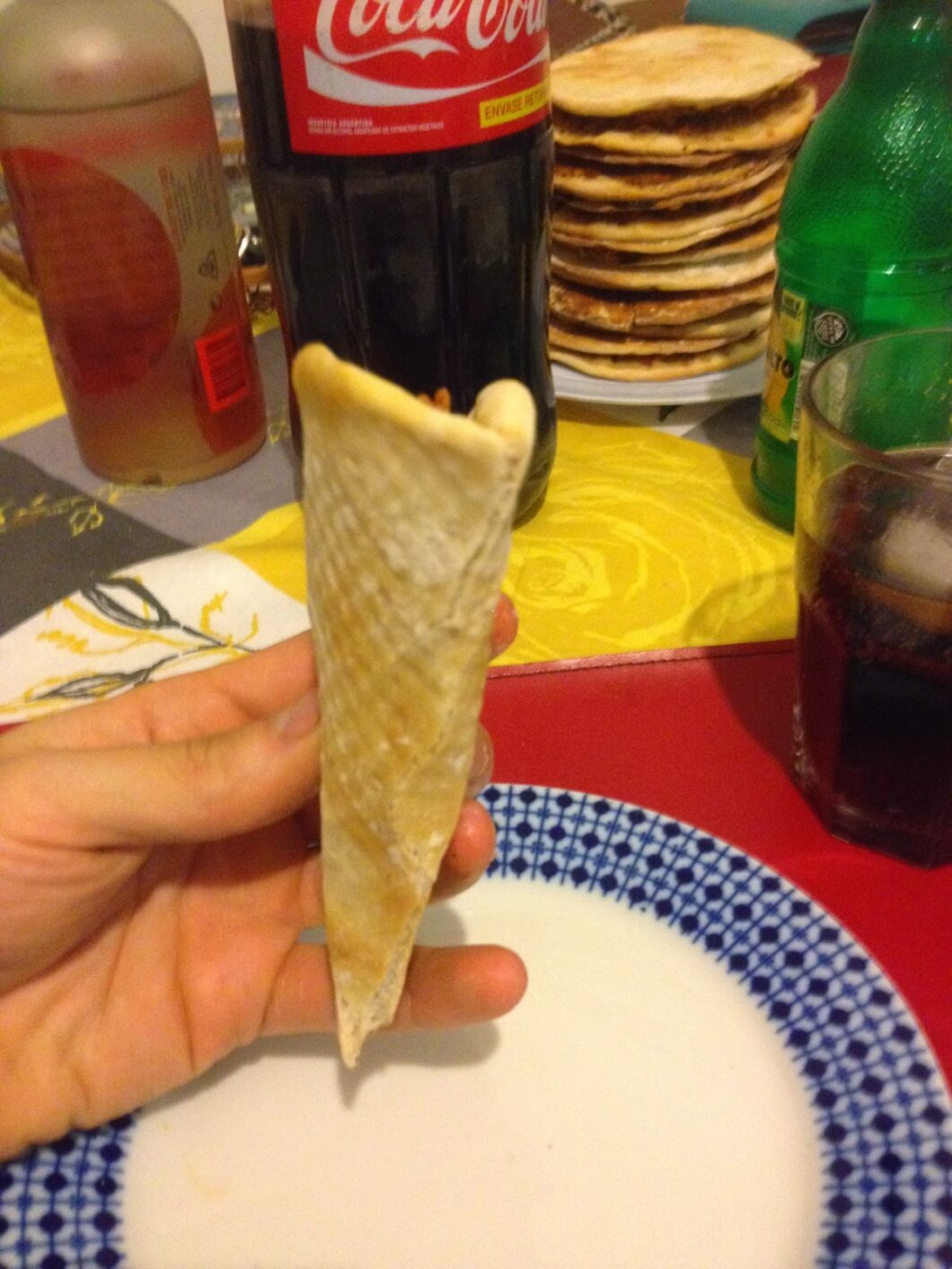 In case you missed reading about the purpose of The Great Lahmajoun Dough Experiment, please click here.

I sent Mike Minassian four lahmajoun dough recipes, and
his first attempt was based on one from the cookbook, ‘Simply Armenian’ by Barbara Ghazarian. Since Mike has made
lahmajoun before, I suggested he use his own recipe for the meat-vegetable
topping, which he did. All photos are courtesy of Mike Minassian.

Dough
recipe #1: From the cookbook, ‘Simply Armenian’ by
Barbara Ghazarian

Directions:
1.Dissolve the yeast in water in the bowl of a tabletop
(stand) mixer fitted with a dough hook attachment. Stir in 1 Tbsp. olive oil,
sugar, salt, and 1 ½ cups flour.
2. Mix the dough until smooth, about 3 minutes. Add the
remaining flour and mix until dough is smooth and elastic, about 10 minutes by
machine. (If this part is done by hand, it will take about 20 minutes.)
3. Shape the dough into a ball and place it in a large
bowl greased with olive oil. Turn the ball once to coat it completely with oil.
Cover with a clean kitchen towel and let stand in a warm place for about 1 1/2 hours, or until doubled in size.
4. Place dough into a floured work surface and punch it
down. Knead the dough into the shape of a log. Cut log into 12 equal pieces,
then roll each piece into a 7-inch circle.

Mike’s
comments and photos for Experiment #1:
Here’s my first attempt of making “the best dough ever”. In
this recipe I used the recipe from the cookbook “Simply Armenian”. I
made a few modifications: I added 1 Tbsp. butter, and for the baking sheets,
instead of using oil I used flour (the same I used for the dough). I made this
because the elderly lady (the woman who´s lahmeyouns are great) seems to do it this
way. After I mixed the dough until smooth and elastic I put it in a bowl,
covered with a plastic bag and then a kitchen towel on top (see pictures
“dough 1” and “dough 2”).

This time I also took photos of the topping, just for you
to know how I made it.

I used 500 gr. (about 1.2 lbs.) beef minced (I’m sorry
if I use metric measures sometimes). 2 onions and 2 tomatoes finely chopped,
actually I rather like to process them. Some parsley also chopped. Also added
1/4 of a roasted red bell pepper (I made this some weeks ago). At this point I
should mention to you that the Armenians here in Argentina, at least in
Cordoba, use tomatoes for the topping instead of peppers, though I like to add
some to my recipe.

The spices I used include salt, paprika, ground chili,
tricolor pepper, chemen (or fenugreek), and hot chili powder. I mixed
everything with my hands, and then processed all. I do this because I like the
topping to stick together after I cook it. For this I also add a tbsp. of white
vinegar (apple vinegar). After everything is processed I added the juice of one
lemon and let it stand for an hour in the fridge. This amount of topping is enough for making a bit more
than 2 dozens, so I just used half of it this time, and saved the rest for next
time.

After the dough doubled its size I made the little balls
and shape them into disks, put them on the baking sheet (previously covered
with flour), added the topping on, and into the oven 250°C – about 475°F – (very
hot) for about 10 minutes. That´s it.

Conclusion:
They were good enough, the dough wasn’t that crispy, I could roll them just
fine, though at some point I could see some cracks in the folding and the
borders were a little crispy.  I think I can make
them a bit thinner, since the baking made them thicker than I expected. They
were not as greasy as the Lady’s lahmejouns, but they were good anyway. Next
weekend I’ll try a different (dough recipe), probably with some new additions that improves
flexibility.