Although we’ve never met, Sonia Tashjian and I are kindred spirits. She is originally from Musa Dagh; my maternal grandparents are from the same region. Sonia and I both have cooking websites; hers in Armenian, mine in English. Our goals are the same – the preservation of recipes and traditional foods of our Armenian ancestors.  You can imagine my excitement when she introduced herself to me!


(Update: I had the pleasure of meeting Sonia in Yerevan in April, 2015, when my husband and I traveled there in time for the 100th anniversary the Armenian Genocide.)

Now, I would like to introduce you to…Sonia Tashjian:

Sonia is currently living in Yerevan, Armenia and, for the past 8 years, has had a TV show – a kitchen (cooking) program, although she insists she’s not a cook. In addition to being a poet and philosopher, Sonia has spent many years studying & researching all about Armenian traditional cuisine, gathering whatever information and traditional recipes she could from the various villages.  Her latest endeavors are to complete her PHD studies and to prepare a dictionary of Armenian foods.

In keeping with St. Sarkis Day, which falls on February 4th this year, Sonia also shared one of her grandmother’s special recipes to commemorate the day – KUMBA cake. Sonia has visited the St. Sarkis holy place in Kebusiye, Musa Dagh, and sent the photo seen here. In addition to the cake recipe, Sonia included a story about St. Sarkis Day.


We certainly admire Sonia’s many accomplishments, and wish her much success in the completion of her PHD degree, and her Armenian food dictionary. We also offer our profuse thanks to Sonia for sharing her grandmother’s recipe as well as the photos of her homeland and wonderful holiday cake!!


Read on, and if the mood strikes you, why not whip-up a St. Sarkis Day Kumba cake of your own!
(PS: Don’t forget about the St. Sarkis Halvah recipe!)


The Story of St. Sarkis Day
from Sonia Tashjian

St. Sarkis has been one of the most popular saints for Armenians, especially for teenagers & lovers. There is an interesting tradition in Armenia related to this holiday. The night before St. Sarkis Day, the teenagers will go to church, firmly keeping an “Aghi plit” (salty cookie) in their pockets, which must be eaten before going to sleep. The salty cookie will make them thirsty & in their dreams whoever offers them a drink of water, will be their future husband or wife.

There are other special foods related to that holiday. St. Sarkis’s holiday known as “Khashil bas”, “khashil” is a very unique food, prepared with roasted & ground wheat. The Armenians in Lebanon and Syria used to buy a special halva for that occasion. But the most delicious cake for St. Sarkis holiday is the Musa Daghian “kumba”, a kind of “Darehats” (Year Bread), which has been a habit to prepare at New Year, in all the regions of Armenia. According to the tradition of darehats, also in kumba, it’s a term to put a “michink” (something to put in), a coin or a core of a fruit. Whoever receives the item in their serving of bread or cake will be the luckiest of that year, and will be the supporter of that family.

Here is the Kumba cake recipe from my grandmother Marinus (Mariam). The cake is very aromatic and has a special taste because of the abundance of spices and nuts. By the way, it’s a Lenten recipe, and because of that, the cake does not contain milk, eggs or butter, so the cake doesn’t rise much and the texture is a bit dense.


½ cup of white sesame seeds for the top 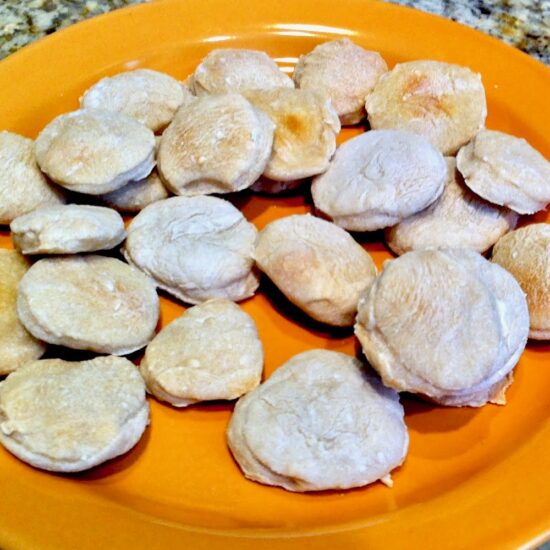