Every year our family vacationed at the Van Hotel, an Armenian hotel in Asbury Park, at the Jersey shore. This summer would be different; instead, our family would be celebrating my parent’s 25th anniversary by visiting relatives in California.

Not only would we get to see CA for the first time, but we were about to meet many of my father’s relations who moved out West in the 1930’s and 40’s, and meet their children who were native Californians. We traveled from San Francisco to Fresno, to LA. What a time it was!


While visiting Dad’s cousins, Alice and Hrant Atikian, in San Francisco, they arranged for us to meet their dear friend, George Mardikian, who just happened to own the then-famous Omar Khayyam restaurant.

Alice called ahead to make sure they had lamb shanks on the menu that night. It’s a good thing she did; there were only four portions left. She asked that they be reserved for our party of eight. I thought, that was odd – 4 portions for eight people?

Boy, those must be gigantic lamb shanks! It turned out the lamb shanks were for the adults; the kids were “stuck” eating succulent morsels of shish kebab with all of the trimmings! Quite delicious, as I recall.

To highlight the meal, the staff and Mr. Mardikian presented me with a birthday treat – a delectable piece of paklava with a birthday candle – while singing the traditional song. In
addition, I received an autographed copy of Mr. Mardikian’s autobiography, Song of America, while my sister received an autographed copy of his cookbook, Dinner at Omar Khayyam’s.


I mentioned this cookbook to my thoughtful husband in passing. He knows how much I love cookbooks,so he searched on-line, found a hard-covered version from 1944, and surprised me with it recently. The book is tattered, age-stained,and smells musty, but it’s a treasure to me – and yes, it’s autographed, too!Armenian Chicken Soup


If George Mardikian were alive today, I’m sure he would permit me to share this recipe from his cookbook, Dinner at Omar Khayyam’s. It’s a traditional Armenian chicken soup recipe, Havabour, which he referred to as “Wedding Soup.”


Mr. Mardikian mentioned in this cookbook that Wedding Soup was served at ceremonial dinners, such as weddings, and that, as the wedding party arrived, the soup ingredients were mixed together and served at once.


Directions:
1. Cook vermicelli in broth.
2. Beat eggs thoroughly, adding lemon juice while beating.
3. Gradually add some of the chicken broth to the egg-lemon mixture, pouring slowly so that the egg will not curdle. (This is called “tempering.”)
4. Combine this with the remaining soup.
5. Season with salt and pepper, to taste. 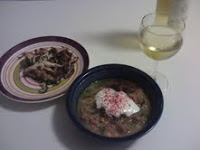 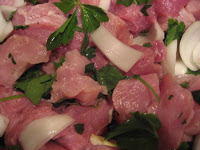