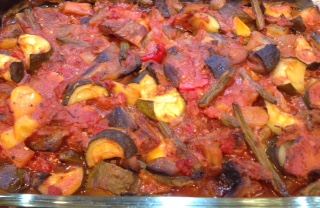 Autumn has arrived, for the most-part, in South Carolina. After
4 decades of not being able to differentiate one season from the next in Florida, Doug and
I are finally experiencing, and loving, the cooler temperatures and colorful leaves on the surrounding trees.

To mark the occasion, I decided to celebrate with a a big pan of
Gouvedge. Not familiar with gouvedge? It’s a heart-and-tummy-warming casserole of lamb, vegetables and LOVE!

Day One Preparation:
Place the lamb bones in a large pot with enough water to
cover bones. Bring to a boil, skimming any residue from the surface during the cooking process. Reduce temperature to medium-low; place a cover, tilted, on the pot.
Cook for 1 to 1 ½ hours, or until the meat is tender enough to easily be removed
from the bones. Periodically check the water level; do not let it all evaporate.
Add more as needed. You should end up with at least 2 cups of broth.
Remove bones from the liquid and place on a plate. Once
cool enough to handle, remove meat from the bones; place meat in a bowl, cover
and refrigerate until the next day.
Strain the liquid from the pot; discard any unwanted
particles. Place strained cooking liquid in a bowl, cover and refrigerate
overnight.
While the lamb cooks, cut all of the vegetables as noted
above. Store the vegetables in separate plastic food storage bags and
refrigerate.

Remove the layer of fat from the surface of the chilled
lamb broth; discard fat.

In a large bowl, dilute the tomato paste with the lamb
broth (there should be about 2 cups). Stir in the diced tomatoes and its liquid.
Mix in the seasonings to taste. Add the lamb and vegetables – EXCEPT for the
okra. Gently toss to combine.

Evenly spread the lamb-vegetable mixture in the prepared
pan, cover with foil and bake for 45 minutes. Remove foil. If using okra,
add it now. Mix okra into the gouvedge and bake an additional 45 minutes.

While gouvedge is baking, make rice or bulgur pilaf to
serve as a side dish.
Crusty bread is required for dipping!