Harry Bichakjian learned to cook somewhere between the historic Armenian city of Kharpert and Chelsea, Massachusetts.

Like so much about my maternal grandfather’s life, exactly where and how that happened is a mystery.

I know that he came to the United States in 1887 at age 17, making him something of an Armenian-American pioneer. Chelsea, just across the Mystic River from Boston, became a magnet for other Armenian immigrants who found work in the nearby factories and mills. Grandpa eventually opened a boarding house and a lunch room.

Many of these Armenians found themselves migrating again when the factories moved South in the 1920s, and Grandpa went along. So did my other grandfather, Harry Kalajian.

The two Haroutyuns opened a restaurant together in Union City, New Jersey, with Bichakjian Grandpa running the kitchen. I know two things about the restaurant from first-hand testimony.

My father, who ate his first meal in America there in 1928, recalled that there was no menu. Everyone ate whatever Grandpa spooned into their bowls, usually starting with bulgur pilaf. Alice Bakalian, my mother’s cousin, remembers Grandpa’s pies — apple and apricot — freshly baked and cooling on top of the ice box. He always gave her one to take home.

I never met my grandfather the cook, but I remember his pies because my mother baked them. Grandpa’s apricot pie, perfectly tart and sweet at the same time, was her knockout dessert specialty.

Now, it’s Robyn’s. She bakes an apricot pie every holiday in honor of my mother.

You don’t have to wait for a holiday. This pie itself is reason to celebrate.

And what could be more Armenian than a pie filled with prunus Armenicus? 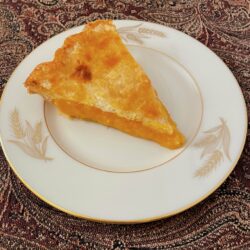 To Bake the Pie:

Note: The filling can be made a day in advance and kept refrigerated until ready to use. If making pie crust from scratch isn’t your thing, feel free to purchase ready-made pie crusts usually found in the dairy section of most supermarkets!
Tried this recipe?Let us know how it was!
(Visited 712 times, 1 visits today)
apricots Armenian apricot pie harry bichakjian 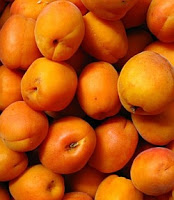 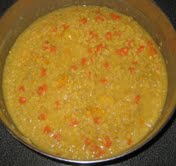