According to its license plates, Georgia is referred to as the ‘Peach State’. The truth is that South Carolina, our new home state, is
actually the largest peach-producing state on the East Coast.

Someone, somewhere stated that if you bite into a South
Carolina peach, you’ll know what summer tastes like. Been there, done that, and
it’s absolutely true!

That said, Christine Datian just sent me one of her recipes, featuring summer peaches, which
recently appeared in The Armenian Mirror Spectator. Read on, give her recipe a try, and savor the sweet taste of summer!
Christine Datian’s Summer Peach Cobbler with Walnuts and
Raisins

Preheat oven to 350 degrees F.
Place sliced peaches in a buttered 9″x13″ baking or casserole
dish.
In a medium bowl, beat the egg with lemon juice and
vanilla; sift sugar, flour, baking powder and salt into the bowl, and stir
until dry and crumbly.  Sprinkle this
mixture over the peaches.
In a separate bowl, combine brown sugar, walnuts, raisins,
cinnamon and nutmeg.  Sprinkle mixture
over the top of the dish and dot with butter.
Bake for 35-40 minutes or until peaches are bubbly around
the edge and the top is golden brown.
Serve with whipped cream, ice cream, or sliced fruit or
berries on the side.

To the peaches, you can add one or two cups of fresh nectarines, blueberries or boysenberries.

You can substitute 1 cup brown sugar or stevia for the
granulated sugar.

Because stevia is so much sweeter than sugar, a direct
substitution is not possible. For every cup of sugar your recipe calls for,
replace it with either 1 teaspoon of liquid stevia, 1/3 to ½ teaspoon stevia
extract powder, 1 tablespoon concentrated stevia liquid, or 18 to 24 individual
serving packets.

*Christine’s recipes have been published in the Fresno Bee
newspaper, Sunset magazine, Cooking Light magazine, and at http://thearmeniankitchen.com/ 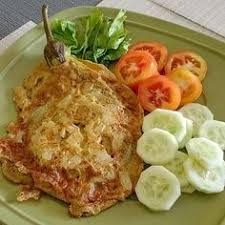