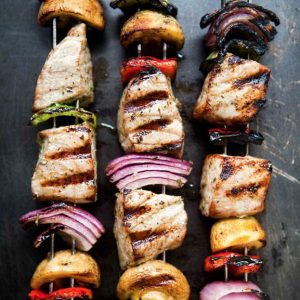 In February, just before Doug and I moved to the Carolinas, I received an email from Lianne Won, whose family owns Marshallberg Farm, in N.C. They have two facilities – one in Lenoir, NC (near Boone) and another in Smyrna, NC (near Beaufort). They raise Russian sturgeon for its meat and caviar. Their website states (in Russian) that they are ‘The largest producer of Russian Sturgeon in the USA’.

Lianne mentioned that they receive a lot of calls from Armenians in NC (particularly in Charlotte), who are excited to order some fresh sturgeon meat. She asked if I could somehow let the Armenian-Russian community know about their products.

Since Lianne’s first email, I learned that her company’s sturgeon is now available at Super G Mart, a gigantic international market, on the east side of Charlotte, as well as online.

I’d never eaten sturgeon before, but noticed that it’s on the menu at the Ararat 17 restaurant. As it turns out, Marshallberg Farm provides the sturgeon served at this restaurant.

I made a point of ordering the sturgeon kebab on our last visit.
Our server warned me that the taste might be strong. Despite this warning, I ordered it anyway. I can happily report that the flavor was rather mild. Some might object to the texture, however, as it is firm – not flaky – and a bit chewy, but that might have been the result of its preparation.

To be fair, I contacted Lianne to ask about the texture of cooked sturgeon.
Lianne noted that the sturgeon’s texture is indeed dictated by it’s preparation. When she prepares sturgeon, Lianne bakes the fish slowly at 350 degrees F in a covered pan for about 20 minutes. Then she grills it quickly to get the grill marks and a charcoal taste. Lianne states that sturgeon meat comes out better when it is not cooked over direct heat.

My sturgeon kebab was attractively presented with the two side dishes I selected (fluffy rice and a very tasty hummus).

A small cup of pomegranate molasses accompanied the dish. The owner, Vardan, happened to stop by our table, so I asked why the pomegranate molasses was on the plate. He said they serve the sturgeon that way because many of their Armenian customers from Baku prefer it.
I’m not one to argue, so I dipped a piece of the kebab into the sweet, tangy, pomegranate molasses, and decided I liked it better plain.

I didn’t ask Vardan for their sturgeon kebab recipe, but Lianne’s site offers some impressive ways to prepare sturgeon, including one for kebab.

With Lianne’s permission, here is the Sturgeon Kebab recipe from Marshallberg Farm. 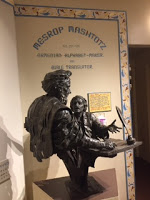