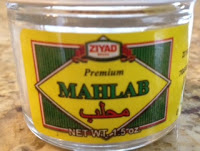 Many don’t know what MAHLAB is, so
I’ll clue you in.
Mahlab is an aromatic spice which comes from the stones or kernels from black cherries. The kernels are cracked open, the seeds removed and dried. These little gems are sold whole (which I prefer), or in powdered form. Mahlab is used mainly as a flavoring in baked goods –such as choreg, cookies, and cakes. It’s sold in Middle Eastern stores, or can be purchased online.

Powdered mahlab will lose its flavorful punch rather
quickly, so it’s best to buy it in small quantities, and store it in a cool,
dry place. Whole mahlab seeds store well in the freezer for a very long time.
Grind it just before using for best results.

Mahlab has a very distinctive flavor. Some say its
taste is a cross between a bitter almond, cherry, with a hint of rose. You’ll
have to try it and decide for yourself. Once baked in a recipe, the scent is alluring,
and the taste is subtle.

The chorag recipe my family made always included mahlab –
along with ground anise, ground fennel, and ground ginger- a unique combination
of flavors that work very well together.

The only time I ever use mahlab is in chorag, so I decided
to incorporate some into our family’s recipe for Armenian Walnut Cake, tweaking
it here and there.

NOTE: Since
I was baking for two, I cut the ingredients of the recipe below in half, and baked the cake in an 8”x 8”
pan. This yielded 9 generous square pieces. By the way, the cake tastes remarkably like sweet chorag, but with a more cake-like texture.

In a large mixing bowl, cut the butter into the sugar
using a pastry blender or two knives or forks.

The mixture should resemble small peas. Mix them together until blended. Beat in eggs until just combined. Set aside.


In a separate bowl, combine the flour, salt, mahlab, and baking powder.

Alternately add the flour mixture and warm milk to the
butter mixture to create a batter.

Preheat oven to 350°F. Lightly butter and flour the bottom
of a 9”x13” baking pan. (Shake out any excess flour.)

Pour batter into pan, spreading it evenly. Sprinkle the
batter with toasted sesame seeds, if desired.

Bake for 35 minutes or until a toothpick inserted in the
middle comes out clean. Cool completely on a wire rack.

Cut into squares and serve with coffee or tea. 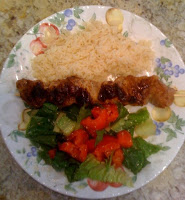