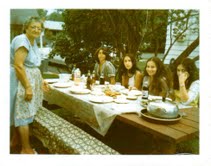 When I reached out to my readers in search of foods native to Adapazar, no one responded – until now.

Grace Haronian, from Connecticut, told me her maternal grandmother hailed from Adapazar, however, she didn’t really know what recipes represented that area with the exception of one – zucchini pancakes.

This is what Grace wrote:
“My mother’s mother (Knar Tutunjian-Marashian) is from Adapazar. I don’t know what foods are specific to that area. However, one thing I love (and I don’t see on your list of recipes) is a zucchini pancake that she used to make. It is a simple mixture of flour, eggs, grated zucchini, grated onions, salt, and a little baking powder, pan fried in olive oil. And, like so many Armenian foods, you can eat it hot or cold.
(My grandmother) also used Swiss chard when making dolma, in addition to the usual tomatoes, peppers, and zucchini.”

(In the photo above: Grandmother Knar, feeding her grandchildren in Massena, NY. Grace Haronian is 2nd from the right, circa 1973.)

After reading the note from Grace, I dusted off a zucchini pancake recipe I’ve had for years, and e-mailed it to her.
Grace responded with: “Yes, this recipe sounds very similar to what my grandmother made. So delicious! Of course, I don’t have measurements. Medzmair said she cooked “by eye” – “achke chop”.

Read more about Grace’s family below this recipe.

Directions:
1. Rinse and gently scrub squash; do not peel. Pat dry. Remove both ends of the squash and grate. Place grated zucchini and onion in a colander and press to squeeze out as much excess moisture as possible.
2. In a mixing bowl, combine the zucchini, onion, eggs, parsley (if using), flour, baking powder, salt and pepper until well-blended.
3. Add enough olive oil in a skillet to coat the bottom. When hot, spoon about 2 Tbsp. of the mixture for each pancake into the skillet and flatten. Do not crowd the skillet. Cook 3 to 5 minutes on each side, or until golden brown. Add oil as needed. Continue until all of the mixture is used. Drain pancakes on a plate lined with paper towels.
4. Serve hot or at room temperature. May be served with a dollop of plain yogurt or *yogurt-garlic sauce.

Ingredients:
16 oz. plain yogurt
2 garlic cloves, minced
2 tablespoons lemon juice
salt to taste
Directions:
1. In a small mixing bowl, combine yogurt, lemon juice, garlic, and salt. Mix well.
2. Chill until ready to serve, allowing flavors to blend. Can be refrigerated for up to 5 days.
________________________________________
Grace was kind enough to share a little family history. Her mother, Ardell Marashian Haronian, was just three years old when she was brought to America in 1927 by her widowed mother and Grace’s great-grandmother. The family settled in Massena, New York, along the Canadian border.

“There was a strong community of Armenians there,” Grace wrote. “I think they were primarily attracted to the area because of work in the aluminum plants. My grandmother remarried and spent the rest of her life in Massena, until she died in 1990.”


Grace’s mother moved to New Jersey after getting married. That’s where Grace gew up. “But, every summer we visited Massena and enjoyed some really good Armenian cooking. I even remembered watching my grandmother make filo dough with a broomstick. I have never been brave enough to try that trick.” Along with the memories, Grace included a few pictures.
Photo on Left: Grace’s grandmother, Knar Tutunjian Marashian, at her familiar place in the kitchen with one of Grace’s cousins.
Photo on Right: A family photo on the steps of the Hye Hotel in Asbury Park, NJ.