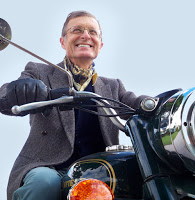 Our friend David Blasco authors a lively blog about Royal Enfield motorcycles, RoyalEnfields.com. You may recognize his name from previous posts and from his occasional comments on this site. You probably don’t recognize the brand.

Royal Enfield motorcycles have never been common in the States
but they have a storied history in the United Kingdom and the Commonwealth. Their
popularity eventually waned in the home country, however, and the factory
closed in 1970.

Production resumed a few years later, not in England but in
India. David, who was not yet a motorcycle rider, knew nothing about this
until he read a newspaper article in 2001. He was enchanted by a peculiar
circumstance: Enfield India wasn’t building replicas or updated retro bikes. It
had simply continued to build the Royal Enfield Bullet, icon of long-ago era.

David, inveterate Anglophile and fan of unusual vehicles,
could not resist buying a brand-new 1955 British motorcycle. Readers around the
world have been following his adventures since 2008.

Note that I use the word “adventures” from a special
perspective: I do not ride a motorcycle. My big excursion most days is walking
to the mailbox. So, David’s tales of puttering along the palmy streets of Fort
Lauderdale, Florida at harrowing speeds up to 40 miles per hour seem adventurous to me.
At least, they did until David passed along this link to a
video blog by a 31-year-old Danish rider named Noraly. She is traveling the
world on a Royal Enfield, albeit a more modern variant suited to traversing
deserts, mountains and rock-strewn trails.

In other words, the perfect vehicle to reach Armenia.

Noraly has posted several videos from her time there, including
a side trip to Artsakh (Karabakh). Food features prominently. If you’re
impatient watching roadside scenes, fast-forward this video to 9 minutes, 10
seconds and join her for an impromptu dinner with an Armenian family who
invited this stranger into their home when she stopped to ask for directions.
She later spends the night at a “hostel,” really a rented
room in a village home. For her, it’s an experience. For us, it’s a sobering
glimpse of life in rural Armenia where nearly all roads are rocky and rutted,
and where the little dram offered by a passing traveler can provide a critical
boost to a family’s fortunes.

Noraly is not a tour guide nor historian, so her commentary
is mostly about the rigors and rewards of long-distance motorcycle riding. But
she offers repeated praise for the beauty of the countryside and for the
friendliness of Armenians who have so little for themselves yet share everything
so generously.

And, of course, she instantly learns to love Armenian food!


You can learn more about Noraly and her journey at ItchyBoots.com. We wish her safe travels.
(Visited 155 times, 1 visits today)
David Blasco ItchyBoots.com Royal Enfield