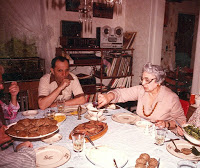 My mother, Sylvia Kalajian, loved having company for Sunday dinner even though she worked six days a week.


She loved her company so much she didn’t cook just one dinner. She cooked two: One Armenian, one American. “Some people may not like Armenian food,” she’d say.


That always puzzled me, because I don’t remember anybody saying no to anything Mom cooked. But I never argued because it meant that I got to eat two fabulous dinners instead of one.


A typical company dinner meant kooftah (you spell it your way, I’ll spell it mine) with home-made madzoon — and roast beef with mashed potatoes, gravy and all the trimmings.


Actually, there was one person who consistently turned up her nose at nearly every dish: My mother. She rarely ate more than a tiny portion of meat, barely enough for a chihuahua.


She always put as much effort into the sweets as the main course, often more. There was pakhlava, of course. Made-from-scratch yellow cake with walnuts. And if the company was very lucky, a tangy-sweet apricot pie.


Everyone left with at least a small portion of everything, wrapped in aluminum foil.


And nobody ever left hungry.