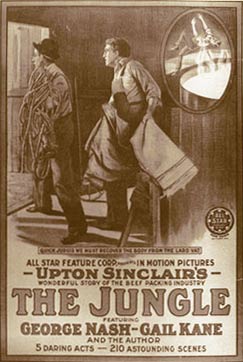 The U.S. House of Representatives is set to vote this week on The Food Safety Enhancement Act, a sweeping bill that promises closer inspections at every step of the food supply chain along with tougher penalties for violators.

The legislation was spurred by several recent scares, including E-coli contamination discovered in spinach and pisatchio nuts.

The bill would require every food producer and processor to register with the Food and Drug Administration and to develop food safety plans. According to the McClatchy news service, an estimated 360,000 facilities nationwide face FDA inspections under the bill.

Sounds good to us — but haven’t we heard this before?

Food safety has been a major public issue since the first federal food-safety acts were passed amid the uproar over Upton Sinclair’s reality-based 1906 novel, The Jungle.

Tip: If you haven’t read it, wait until after dinner. Sinclair’s depiction of a corrupt and filthy meat industry is still stomach-churning after all these years.

If you’re convinced we’ve made progress since then, consider that The Centers for Disease Control and Prevention estimates 325,000 people across the U.S. are hospitalized each year because of food-borne illness.

How can we still be struggling with something so basic: How to be sure we’re eating clean, fresh food that will nourish us instead of poisoning us?