One of our minor but very real gripes about South Florida when we moved here in the late 1970s was the almost total absence of Armenian food.


Somehow, we moved to a place where it was probably easier to buy a kilo of cocaine than a sack of bulgur.


As we’ve noted, the culinary scene has definitely brightened for Armenians and fans of other Near and Middle Eastern cuisines as well. But the advertisement above suggests we may have arrived a little late rather than early.


The enticing prospect of a shish kebab dinner for $1.50 greeted readers of the now long-departed Miami News on May 3, 1950.


Was it any good? The same paper gave the restaurant a rave review a few months earlier.


The headline: “Armenian Dinner Offers Variety at Palm Tree Inn Overlooking Bay.” Reviewer Helen Burns warned readers to arrive hungry because “the courses are numerous, the portions are generous and the food is delicious.”


Of course, like any good reporter dining on the company’s tab, Helen splurged. She ordered the beet soup, salad, borek (“a pastry with hot cheese”) and finished up with paklava. The bottom line: $2.58.


Best of all, the lamb kebab was tender and “roasted perfectly.”


The setting sounded even better than the food. The dining terrace overlooked the spot where Miami River flows into Biscayne Bay.  As she enjoyed her lamb, “the moon, a great golden globe, appeared to come up out of the very water.”


I know the spot. The Bay still shimmers seductively by either moon or sunlight, but you’ll get only the briefest glimpse passing over the bridge on Brickell Ave. Mostly you’ll be dazzled by the reflected glory of blue-glass office buildings framing the Miami Convention Center.


The Palm Tree Inn gave way to rental apartments many years ago, and they in turn gave way to years of controversy. Excavations in the late ’90s turned up evidence of an ancient Native American burial ground along the water’s edge.


Today, Googling the Palm Tree Inn’s address will land you in Miami Circle Park, which preserves and commemorates the historic site.


Pondering all this left us with yet another destination on our long list of places to visit if anyone ever invents a time-travel machine. (We’re betting on Google.)


But it also left us wondering about “your genial host Aram.” Who was he?


If any of you remember the glory days of Miami and a certain Armenian who served up shish kebab by the Bay, we’d love to know more. 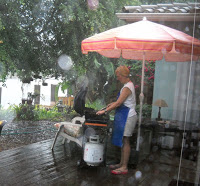 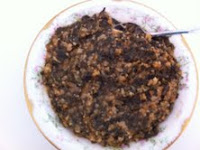