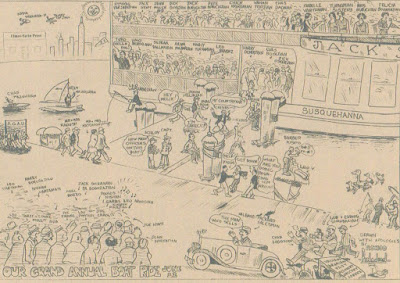 Watching the all singing, all dancing Gold Diggers of 1933 on TV the other night, I couldn’t help blurting out that The Depression seemed like an awful lot of fun.

Of course, we know it wasn’t — except sometimes.

Armenians never a let a little inconvenience like poverty keep them from getting together to make kef (as the old-timers called having fun).

A grand gathering demanded nothing but willing participants, at least one oud and — of course — plenty of food.

Robyn and I heard the stories of good times on a shoestring budget throughout our childhoods. My mother left behind a perfect illustration, tucked among her photo albums: A cartoon drawing of an Armenian get-together from what appears to be the early 1930s.

You’ll want to click on the picture above to magnify the image. If you’re from New Jersey, you may recognize many of the names even if (like us) you’re too young to remember the scene. These are the Armenians of Hudson County, N.J., heading out for a summer boat ride.

What a hoot to see who’s pulling up just ahead of him: Nalband the Packard Salesman, my mother’s uncle Aram– and there’s Aunt Felicia on the upper deck. And look in that sailboat: It’s Aram Mazoujian! He was still an engraver at The New York Daily News when I worked here in the 1970s.

This is nostalgia from 20 years before I was born.

Who created this fun, wonderful and loving work? His signature is at the lower right: Ashod Pinajian. That’s all I knew for years. But in March 2007, The New York Times revealed much more.

Using the first name Art, Pinajian became a comic book illustrator but he gave up commercial work after World War II to become a painter. He apparently never sold much, if anything. He shared a house on Long Island with his sister, who supported him until his death in 1999 at age 85.

When she died seven years later, surviving relatives sold the house and left Pinajian’s paintings behind for the new owners. Not a handful of paintings, either — more than 3,000 works, plus daily journals dating back years.

The buyers shifted their efforts from flipping the house to cataloging and appraising Pinajian’s life work. Meanwhile, his comic book illustrations are increasingly prized by aficionados and now command collector prices.

I hope his paintings are eventually released and shown to the public. I’d love to see an exhibition.

I’m guessing I might recognize some of the faces. 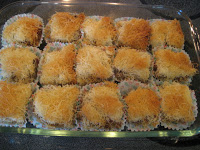 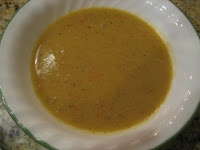 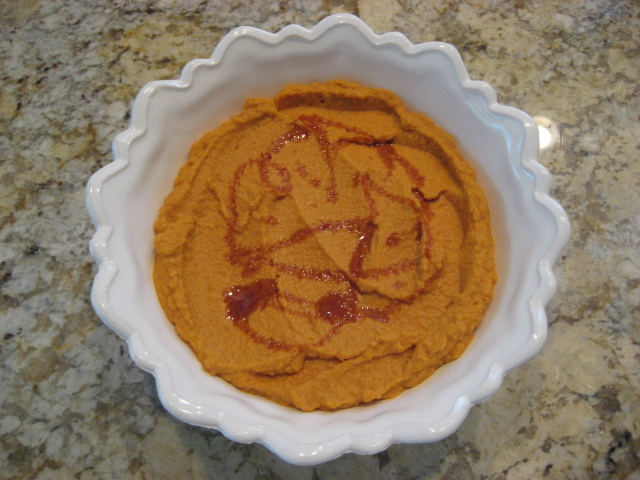