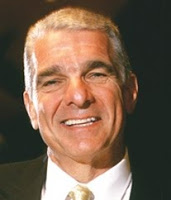 As I was reading “Boca Raton Magazine” in the doctor’s office, an article caught my eye. It was about a new restaurant in Boca Raton called Abe and Louie’s.

The owner is Charles Sarkis, originally from the Boston area, now a Palm Beach resident.
With the last name Sarkis, could he be Armenian? Probably, although I googled his name and found only that he is from “Middle Eastern” descent.

Charles Sarkis sounds like an amazing man – restaurateur since age 24, owner & operator of over 35 restaurants, father of six, cancer survivor, philanthropist, and an active alumni of Georgetown University in Washington, DC. A very upstanding member of the community, one would say.

Charles, living in his father’s shadow, wanted to shed himself of his father’s image. And shed, he did. In 1998 Mr. Sarkis opened his first Abe and Louie’s restaurant in Boston. The “Abe” is, in fact, a tribute to his late father.
Abe and Louie’s is a classic American Steakhouse, serving Prime cuts of steak, lamb, fresh seafood, an interesting array of appetizers, salads, soups, vegetables, and must-have desserts.

There’s nothing on the menu to suggest Mr. Sarkis might be Armenian, with two possible exceptions: the lamb shank, and the Abe and Louie salad.

I came across a 1998 review of the Boston restaurant which mentioned that the Abe and Louie salad was made from Bibb lettuce, blue cheese, apple slices with cinnamon – OK, here comes the “Armenian” part – pistachio nuts, and a hint of rose water.

AHA! So, perhaps Charles Sarkis IS Armenian. I called the new Boca Raton restaurant and asked if rose water is currently used in the Abe and Louie salad. Sadly, no; it’s served with a Dijon vinaigrette.

Oh well, at least they kept the pistachio nuts. As far as Mr. Sarkis being Armenian goes, that‘s still a mystery. I called the headquarters in Boston, but never heard back.

In my mind he is Armenian.